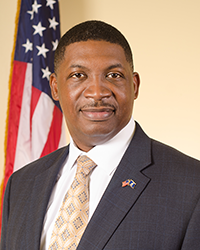 Dr. Shawn Wilson was appointed Secretary of the Louisiana Department of Transportation and Development (DOTD) by Governor John Bel Edwards on January 11, 2016 after more than 10 years of executive service at DOTD.

Since his appointment, Dr. Wilson has been a tireless advocate for new revenue, maximizing Federal dollars available to Louisiana, advancing a balanced and comprehensive transportation policy for Louisiana, and ensuring the Department is more collaborative in its work at every level.

Under his leadership, DOTD was successful at securing and obligating nearly $150 million additional Federal dollars for I-10 widening from I-49 to New Orleans, for the Baton Rouge I-10 bottleneck, and for the shortest Design Build procurement in the state’s history is underway to widen I-10 from Highland Road to LA 73. In addition, under his leadership, DOTD has been able to assist communities with alternative fueled transit assets, focus efforts on advancing passenger rail, and helping launch bike share in Baton Rouge, LA.

The DOTD has turned its focus to procuring $650 million in GARVEE Bonds for two Design Build Projects, a major Urban Interstate Reconstruction and the state’s first Public Private Partnership.

Dr. Wilson earned a B.A. in Urban and Regional Planning from the University of Louisiana and holds a Master of Public Administration degree, as well as a Ph.D. in Public Policy from the Nelson Mandela School of Public Policy and Urban Affairs at Southern University.

Shawn and his wife, Rocki, reside in Lafayette, Louisiana. They have two children, Shawn Wilson- Arceneaux (Mike) and Joshua, and they recently welcomed their first granddaughter Lailah Rose. The Wilsons are members of Progressive Baptist Church.